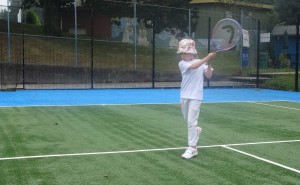 At the club we have a comprehensive junior coaching programme. 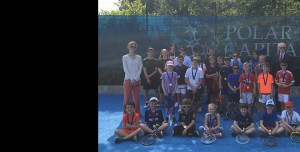 Starter Events – These are for players with little or no experience playing tournaments. They are played in a friendly environment. Each match has a young leader helping with basic scoring and rules.

During the Summer/Autumn we held 4 of these events had over 120 children take part. All matches had a young leader to help the juniors.

In 2017/18 0ver 100 juniors took part in the Polar Capital Starter events. All of the matches had a young leader to help umpire and score. All those who took part received a prize. These events proved a great success for both juniors & parents.

Match play Events Saturday 1pm to 3pm/strong> – For the more advanced junior player. Players from Academy & Satellite squads are invited to take part. Results are sent to the LTA.

GTC Junior Club Nights – Now back on. Tuesday nights 4pm to 5.30pm.  Held during school term time. Players have an organized session and able to get refreshments from the snack bar.

Please note: Tuesday Junior club 4pm to 5.30pm. Open to members only. If you would like to try a session then please email- Rychlund62@gmail.com

William Read wins The Novice singles U10 & U12 Event

Eddie Rothwell got to the quarter finals of the Jersey Closed. He was in the consolation group for the Jersey Open.